Oops! Something went wrong while submitting the form.
Google VetNet

A Career Service For Those Who've Served 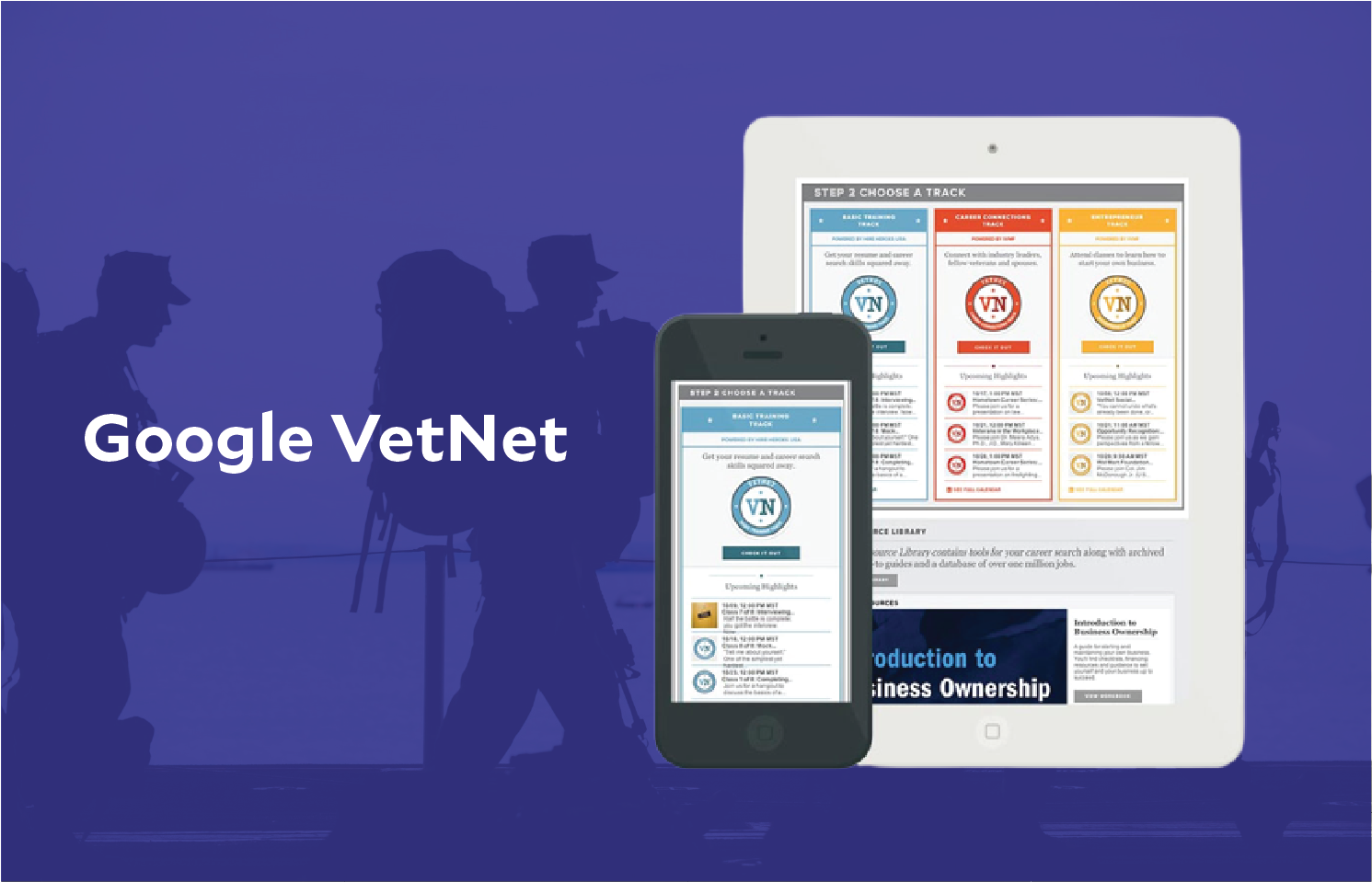 We collaborated with Google to create a solution for veterans who need help pursuing entrepreneurial desires as they transition back into civilian life. With special permission, we were able to experiment with using the Google Plus API to unify a network of veterans organizations under the common goal of helping our returning soldiers with entrepreneurism.

We built a custom content management system entirely out of Google products to create a one-of-a-kind site. Since the launch of VetNet, the site has been featured on TechCrunch, Google’s blog, and several other news sites. On launch day it was featured on Google’s home page and enjoyed over 200,000 users in a single day.

Google wanted to create a site that could be managed by three different organizations while only giving each organization access to their own section. The CMS needed to be easy to use and built using only Google products. Yeti built a custom content management system entirely out of Google products to create a one-of-a-kind site. VetNet uses Google+ profile pages to manage the various sections of the site. This allows us to give the different organizations separate logins and limited access to the site's content. This was all possible through deep integration and novel applications of the Google+ API.

VetNet is a Google initiative charged with unifying the leading veteran organizations under the common goal of helping our returning soldiers with entrepreneurial desires. They are dedicated to helping military personnel transition to civilian life by creating one easy place to start.

The same day VetNet was due to go live it was also to be featured on the Google home page. The site needed to be ready to scale instantly, with no room for failure. A crash on day one would mean hundreds of thousands of lost views across the world. Traffic was also expected to come in from TechCrunch and Google’s blog which were both covering the launch. Yeti was able to build the site and have it live in time for the launch. When the site did go live in November of 2012, there were no issues.

Once the design process was finished Yeti only had about 30 days to implement the designs and build the custom content management system, while still leaving enough time to fully test for the expected user load. The designs were created by our good friends from LA, Use All Five. The goal above all else was to create a visually appealing and easy to use mobile and desktop site for veterans. It was of the upmost importance that they were implemented to the pixel to create that clean crisp feeling. The decision was made and passed down that Google was to feature VetNet on their homepage. The site had to go live on that day and had to work. There was no pushback on a full launch with over 200,000 people expected on the day.

Yeti was given mobile and desktop mockups by Use All Five that we needed to turn into a live, functioning, and pixel perfect site. Through the use of Twitter Bootstrap we were able to create a site that would fold itself to the appropriate size based on the screen size that was accessing it. This created a clean and well designed look for the site across all mobile web browsers as well as all desktop screen sizes.

Since the launch of VetNet, the site has been featured on TechCrunch and several other news sites. They have also been feature on Google’s home page and enjoyed over 200,000 users in a single day.